Bar & stem reviews by nature are never going to be long & detailed. Although important they all do the same job, so you really just want to know weights, dimensions & whether they stay straight & in one piece!

Hope stems are available in a good range of sizes & rises so you should be able to find something that gives you good position. I went for a Hope as it seemed the best combo of price, weight & reliability available at the time. I was looking at the Renthal but it wasn’t any lighter, cost more & doesn’t come in a choice of colours… 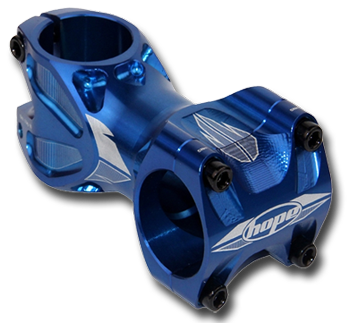 I fitted the Hope stem same time as the bars just over a year ago – no complaints so far, seems super-tough. What could go wrong you ask? Well, I’ve had other lightweight stems twist on me in the past. Not catastrophically but having one grip lower than the other isn’t that great!

Officially the FR version is the 50mm or 70mm, in 0deg or 25deg rise, but they are plenty light enough for XC as well

Downsides? Only the price but there are a lot of more expensive stems out there as well

This is a wide one! When it was released it was the widest DH bar at 750mm. DH you ask? On an all mountain/XC bike? Well, yes. It’s light enough & my paranoia told me that a lighter carbon bar would obviously snap! Probably not true but I don’t fancy being impaled by carbon. Alloy would be fine obviously…

The width suits me, although it seems a bit close when going through narrow stuff. Not hit anything yet though. Other stats are:

This bar feels straighter to me than previous risers I’ve used. Initially I thought it was less than ideal but I’d bought it so best put up with it. But riding with it for a while, it became obvious that being a DH bar it suits the fast, more extreme stuff better & works well with a lower position on the bike, elbows out. Then it fits really well. I’ve not long returned from an off road c2c & it was comfortable with longer days riding. Being carbon the stiffness doesn’t get in the way of vibration absorption & that adds to the comfort. Along with the stem comments above, I used to find that alloy bars would bend slightly on the right (mostly from messing about doing 180’s…) Tough carbon bars can’t so hopefully these will never have to be replaced!

Both were fitted at the same time. There’s been plenty of miles ridden & the odd crash but no issues, as it should be