How well do they wear..?

EDIT:[Race Ready Braking seems to no longer be operating]

First thing I should say is that I don’t go through brake pads that quick. Brake pad reviews have the potential to be extremely subjective as different riders seem to be heavier or lighter on the brakes and sometimes by a huge amount. Added to that, riders being, er, heavier or lighter, the amount different people ride, the terrain & the trail surface of your local trails all make huge differences in the longevity of your brake pads.

So these were fitted in January and after a year are still good. This is about as long lived a set of pads as I’ve ever had. Again, it’s nowhere near 100% scientific! But seeing there’s still life in them, if you order a set & they don’t last you long I’d politely suggest that you’re doing something wrong! It could be your braking technique or not bedding them in or possibly riding in the Dark Peak on a wet day! Having said that, you’ll know how previous brands have lasted as a comparison anyway. 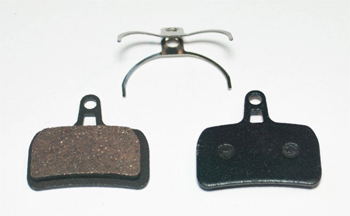 Do they stop you?!

Yes. Obviously they stop you… But how well & how quickly & with how much control..? For context, I don’t chuck stuff out until it can no longer be fixed. Therefore on my 160mm ‘Enduro’, ‘all mountain’, ‘trail’, or just ‘mountain’ bike I am still running a set of Hope Mono Minis from the misty past of 2007. As an aside I’ve only just replaced the lever blades & brass pivots and apart from that I’ve bled them on occasions. So by modern standards they’re not super-powerful stoppers.

I can’t remember what brand the previous set of pads were – it was much longer than 5 minutes ago..! I do remember that they were a bit sub-standard; they felt like the front disc had a touch of oil on it. It didn’t because fitting the RRB pads sorted it out.

All I need to say is that I’ve not been in any situation where the brakes have let me down or caused any problems & since fitting them I’ve never had a dodgy moment caused by not enough power or feel. Incidentally, if you have a set of brakes that you hate,try a different brand of pads before getting rid of them.

Last time I used them in ‘anger’, I was being chased by a teenage nephew who’s fear levels are non existent. I was helped on the downhills by the fact he was on a hardtail but he relentlessly caught up on the uphills. Pride (& the fact that I teach skills for a living) meant he could not be allowed to overtake, or even get too close, so I had to ‘make the most’ of every downhill section.

The quality of the brakes obviously play a big part in staying on the bike when pushing it a bit, but the feel through the levers was good at all times. The only times I was anywhere near to a mistake was pushing the corner speed a bit much, but speed control was always good. Using the same brakes with other pads in the past has given a completely different feel. I’ve tried a good few brands & some have been good, some not so, but the RRB pads are amongst the best for power & feel. At least with my Hope’s anyway.

Price? This is where you might start to have doubts, but maybe not for the reason you’d expect. At £3.50 for a set of resin pads you may be thinking ‘how good can they be? See above…