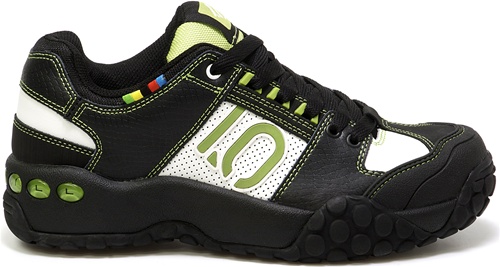 Time for a review. I’ve been using these for a couple of months now so thought you might be interested to know how they’ve been holding up.

I’ve used Five Tens for the last 5 and a bit years, and believe it or not that’s been with the same 2 pairs from the start. When I got the first pair there still seemed some doubt in the air as to whether they’d keep making them. Intense had sold a limited run made by Five Ten beforehand & some downhillers liked them so much they’d bought a few pairs.

I got a pair of the original Impact Low’s then thought that if they decided not to carry on producing them it would be good to have a ‘spare’… So I ordered a second lot, in the high version. The only real problem I’ve had in the whole time is when I forgot to dry out a soaked pair & the midsole disintegrated a bit. Arghh! They’re still useable but a bit soft. The other pair have been sound until recently when the outer sole split, but five years constant use seemed pretty good. I’ve not used anything else the whole time.

Back to the new ones – although the standard Impacts seemed supportive enough, the Sam Hill version has a nylon midsole which is a bit stiffer again. This makes them a little better for pedalling efficiency, but lessens the feel a bit. The main reason I went for these was due to the mentioned soaking of the older pair. I thought the nylon midsole would be more hardwearing.

I actually prefer the feel of the standard shoes, they seem slightly more ‘connected’ with the pedals than the Sam Hill version, but it’s not a big difference. Compared to any other shoes you might use with flats, any pair of tacky soled Five Tens will seem like a revelation.

The other difference to the standard Impacts is that instead of a wrap-around tongue that’s fully attached on one side these have a skate shoe style tongue that has an elastic strap on each side. Again, the standard shoes are maybe slightly more comfy, but this is an even smaller difference.

I have to say I’m happy with them, they’re a quality product, but if I’d known in advance I might have gone for another pair of Impacts, just because they’re cheaper & there was nothing wrong with them.

I’d say if you’ve tried the standard shoes & like them you’re probably best to stick with them, but if you want slightly more support & maybe straight line speed then give these a try.