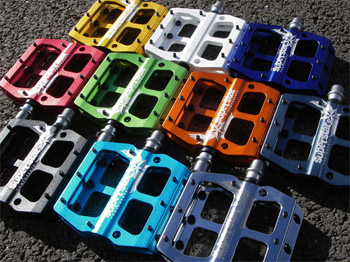 I’ve ridden with the trusty DMR V8’s & V12’s since I switched from SPDs about 5 years ago.

The last lot of V12’s expired recently though, and although they might have been fix-able, it was going to cost a good chunk of the new price in parts, so I thought I’d try something else.

I’d have been happy with another lot of DMR’s, except for the pesky problem that if/when you get a rock strike the allen grub screws are a bit of a pain to impossible to remove. The new Vaults look good but I wasn’t up for the extra cost, so I thought I’d go for some of these Superstar Nanotech thru-pin pedals.

They arrived a couple of weeks ago, but I didn’t try them straight away as the forks on the main bike were away on a warranty repair. First ride out though & I couldn’t fault them. The nice thin profile meant no catches (I’m sure it’ll still happen, but a lot less). The bigger area is handy, or should I make a rubbish pun there & say ‘no, I mean footy’. No, thought not…

Anyway, the size gives plenty of support & means you don’t have to be pinpoint accurate in your foot placement to feel planted. Shape-wise they seem good, nice & comfy which counts for something near the end of an epic. Pin placement gives good grip, even with not so grippy soles, and great traction with the almost compulsory Five-Tens (look out for a review of the Sam Hill version sometime in the next few weeks)

Apart from that, they’ve stood up to jumping & the usual rough stuff that the Five encourages.

I’ll add a comment if the thru pins don’t come out like they should, but as far as I can see the main-steam MTB mag reviews have got it right on these. Great flat pedals & lighter than many. They do magnesium models if you just have to shave off another 100g ish.