Banshee Rune a few months in 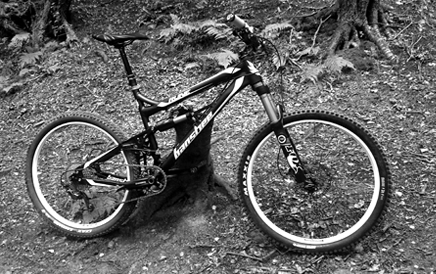 …see the Rune first impressions review for info on the frame. This one is concerned with reliability, some differences in the setup between this one & the demo bike I rode & anything else that didn’t occur to me originally. The 2 frames are identical except for…

– the demo was a medium & slightly small for me (although great fun!). This is a large & it fits me well; although it’s maybe more like a medium from other brands. It’s got enough room that I might still go for a shorter stem in the future to improve the steering & chuck-aboutable-ness…
– The demo was a 650b & this one’s a 26er, the only difference being a different set of dropouts
– This one has no climb switch on the shock; more on that later

It’s rumoured that the 26er is slightly better, but I reckon they’re both pretty good. Much has been written about the advantages of the different wheel sizes but here’s my opinion. The 650b feels like a slightly smoother ride on rockier surfaces & the 26er feels a touch more nimble, most noticeable is that it manuals slightly easier. It also rolls faster on smoother surfaces. Both feel just as solid & the differences aren’t huge. It should be a slow bike on the tarmac, not that you’d be thinking of riding too much road on it! However, I do tend to ride from home to the trails & it’s no slower on the boring smooth stuff than a lot of shorter travel mountain bikes.

In terms of this being a longer term review, although I’ve been riding it for 3 or 4 months it was an ex-demo frame from EDS Bikes so it’s had a reasonable amount of use already. In terms of reliability, nothing whatsoever has been an issue.

There are other differences concerning the complete build, mostly not that relevant. Most of the build came from my previous frame, a rugged & dependable Orange 5, but it’s all vaguely similar in type & quality to the kit on the demo bike. Different forks were required, the Five was running some solid but quite low performance 150mm Sektors. This frame came with a set of TALAS 160 FIT RC2 forks which are solid & perform pretty well. They’re a massive improvement on the Sektors I was running! However, the demo bike was running Pikes & they kind of give you extremely high expectations for anything you ride after! I suspect a set of Pikes will transform any bike that needs an AM type fork. They are that good, really plush but also feel properly fast whether it’s rough or smooth.

The lack of the climb switch on the Cane Creek DB air hasn’t been a worry. On some bikes I’m guessing it would be a real help, on this frame I haven’t missed it. It might be just me but it doesn’t seem to need it, even on the smooth. As with the demo bike this one climbs well, better than a 160mm bike has any right to..! I suspect that unless things change drastically, other shocks may well struggle not to disappoint once you’ve ridden a Cane Creek that suits your bike.

I’ve mostly ridden whilst teaching bike skills, but lately there have been some quicker riders so I’ve also had the chance to get some speed. Despite being a fun bike I’ve not had any scary moments or crashes. The frame/shock combo would generate more grip with a more chunky rear tyre, the current one is mostly OK but drifts out well before the front. A better one will give even more cornering speed in the future.

The bike rides quite light & seems to get up most trail centre slopes without complaining. It leaves that to me… It’s only running an 11-36 with a single 34t at the front, but it’s only my occasional(!) laziness that stops it getting up climbs. As in the first post, the downhill speed is noticeably fast! I guess that means it may not be a bike for wheels on the ground XC riders but with a bit of basic technique anyone can have some fun on a Rune!

I don’t really do ‘points out of 10’ reviews of anything, but I guess the following would be lots of stars; I don’t usually own more that 1 bike & since I’ve been riding the Rune I haven’t really had the x=n+1 formula playing on my mind…”

Look out for some video over the next few weeks, providing the weather plays along!