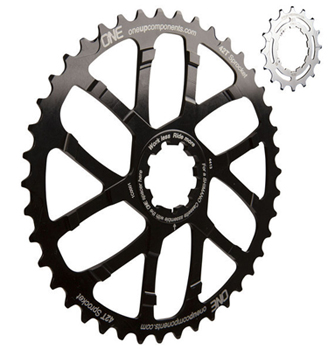 I’ve been on a 1×10 setup for quite a while now, probably a couple of years I think. However the 36t largest sprocket was a bit limiting. If I was race fit I’m guessing it would be plenty. This became apparent watching @GringoJimi disappear up a black climb at Dalby halfway down the cassette while I ran out of gears!

Being a fan of downhills however, (who said unfit & lazy?) 36 teeth isn’t enough for me on the climbs. I looked into available options for a long time. I wasn’t ready to lose the 11 tooth cog as some recommend, and I didn’t like the big jump that you get from ditching the 15 or 17. Another company makes a replacement for the 3 largest which sounded ideal but has all 3 made of alloy & users reported limited life. So it seemed the best compromise was OneUp’s 42 tooth, shipped together with a 16 tooth. The 42 is alloy and the 16t is steel. You replace both the 15 and 17 tooth with the 16 and although the jump isn’t perfect it’s not noticeable after about half a ride.

Fitting is easy for anyone that does their own repairs – you just need to pay attention to the orientation of the cogs to match the brand of cassette you’re modifying. You need to wind the b-tension screw on the derailleur all the way in, and you may well need to remove a washer too. UNLESS…

…you also fit one of these: 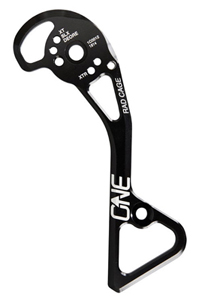 The RAD Cage is a solution to the fact that normal 10 speed mechs aren’t designed to cope with huge cogs. They work, but shifting isn’t necessarily as good as it could be. For some reason I’d ordered one of these way back – I think I was also planning to order an extender cog & forgot. It’s not as simple a job to fit the cage as it is to fit the cog itself, but the instructions are some of the best you’ll get. Absolutely spot on! Granted I’m used to working on bikes and I’ve done so for a long time, but I hadn’t done this job before. One go, no mistakes and it went on perfectly.

What the RAD Cage does is to shift the cage into a much better position for the big cog without messing up the chain coverage on all the others. You re-use the other plate from the mech and when it’s all back on the bike you wouldn’t really know anything had been hacked. Unless you go for the green option! 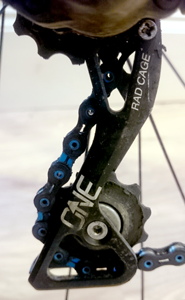 So, 3 months of use including a coast to coast later and it’s performed flawlessly. I’ve been making sure to lube the chain regularly as I was slightly worried about the 42t cog, but it’s showing no signs of mechanical wear, just a touch of silver showing on the side from shifting. If you’re interested I use the Squirt wax lube which seems to stay pretty much grit free. Overall, nothing bad to report, only that I still need to be fitter/lose some weight! But the 42t combined with the 32t oval chainring (see previous post) really does make most climbs doable. This showed up on the c2c as I’ve done it enough times to have a feel for most of the climbs and the effort required! This time they all felt more doable, apart from the ones that no one rides. This despite me not being as fit as on some other years.

I’d be happy to recommend the OneUp setup to anyone looking for a good reliable 1×10 system that copes with most situations a double or triple will. Oh and it also saves a touch of weight too!