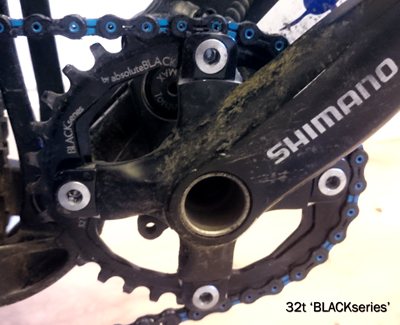 I’ve been impressed by Absolute Black’s quality for a while. I won a narrow/wide 34t round ring from them in a facebook comp a good few months back and it’s not showing much wear at all. Despite running the mech with the clutch switched off it hasn’t dropped the chain once – I found that the suspension reacts better to the small stuff with the clutch disengaged. So I thought I’d give one of their ovals a try based on my inability/dislike of climbs…

Right, lets clear up the misunderstanding with oval rings once & for all..! (I know, an ambitious task, but it’s not too difficult to understand)
I had my doubt of of oval rings cured years ago, although being young & poor I could never afford to run one! I was around when Shimano’s embarrasing ‘Biopace’ experiment was still refusing to die off, but I met an engineer called Chris Bell who had a workshop in Wales about 5 minutes from where my parents lived. As cyclists do, we chatted about all things bike & he showed me round his workshop. Amongst other custom products he’d been making Egg-Rings (a range of round, elliptical & other shaped rings) since before Shimano made their (very rare) mistake. He’s retired now but some of his products are still made by Highpath Engineering. The mags at the time were full of advice to avoid bikes with Biopace because they actually made a bike less efficient, harder to pedal and possibly more likely to cause injuries; the orientation of a Biopace ring being exactly opposite to what it should have been. This unfortunately had a negative effect on many serious riders’ views of oval/elliptical rings in general, despite everyone else’s being fine! People still remember Biopace when anyone talks about non-round rings and assume the modern ones are similarly flawed. Just check out any forum/facebook post on ovals and someone will say “seen it before” and talk about Biopace. At the time there were some other lesser known Biopace clones too, as well as various others that worked. To stop me rambling, if you’re interested have a look at Chris’s website and a handy history of non-round chain rings.

Anyway, the long & short of it is that an oval or elliptical ring orientated correctly WILL do what it’s supposed to do, which is give you a higher (harder) gear when you can use it and then an easier gear at the dead spot where you have the least power. This isn’t necessarily suitable for every style of bike & rider but it does work particularly well on mountain bikes and single-speeds, although not exclusively. Absolute Black’s site & facebook page has some info and video explaining why they like oval rings. Biopace gave an easy gear where you had most power, then a hard gear where you were struggling at the dead spot!

Anyway, that’s a load of background but my review will be short! For once… Maybe…

So, it does it’s job extremely well. Main difference between these & older oval/ellipticals is the narrow/wide profile which is designed to keep the chain in place. I wondered if the oval profile would result in one or two chain losses but not so far after a good number of miles & rocks.

It felt weird in the first 1/2 mile but then on familiar climbs I could immediately feel the difference. It’s noticeably more efficient, more-so the harder you have to push. On fast flat sections & downhills there’s no downsides but you get more benefit on climbs. The 32t I’m running is effectively a 34 when you have the most power, but feels faster than the 34 round I was running and easier on climbs than the 34.

I’m running the “Black Series” version which is the same as their standard rings but with less machining so weighs a bit more. The functional bits are the same though, but it costs less and is only available through Chainreaction.

And if you’re curious but not convinced they will let you buy an oval from their site, use it for 30 days & if you don’t like it they’ll swap it for a round ring for nowt!