How has Middleburn’s RS7 stood up to the abuse? 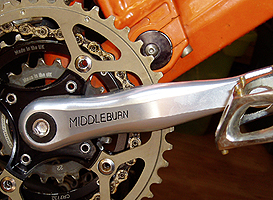 There’s a lot of talk about how stiff various cranks are. These ones are stiff, although I can’t say that cheap ones feel flexy. The Middleburn RS7 crankset is also on the light side. They’re made out of quality alloy in the UK. They’re a little bit pricey, with a RRP for the arms & a spider around £150 but you often see them for a fair but less than the RRP. They do have a lifetime guarantee which includes DH & dirt jumping. It doesn’t cover the splines but it’s rare that they would go on any crank in use. I would guess the disclaimer there is to avoid paying out for dodgy fitting. If you want even lighter still, the RS8’s still have a lifetime guarantee but not for DH & jumping.

What About the Bottom Bracket Standard?!

[edit 2019] – Middleburn went out of business but are back, now made by BETD
They’re available in square taper & ISIS. Stop, I hear you say, but aren’t ISIS BB’s the worst product ever invented? [EDIT – when written, the now more well known organisation with these initials didn’t exist…] Well they seem to have a bad rep, but in my experience if you get a quality BB, (not necessarily the most expensive), they last as long as the old square tapered ones. The axles are larger diameter & therefore stronger. The FSA Platinum I first used lasted 16 months of hard use before any play developed. It was replaced by a Superstar a couple of months ago, the design of which makes total sense, so I’m expecting that to do well. As a comparison, the best I’ve had from an external type BB is 6 months, the worst is 3 rides! Before anyone asks, yes the BB shell was faced. There are better units available now, however, from Hope, Chris King & others.

Although these have a triple, Middleburn use replaceable spiders & you can fit a lightweight XC double where the inner ring is also the spider for the big ring. Uno setups do away with a spider, the ring fits where the spider would normally. Spiders are available in XC & DH versions, and trials set-ups are also available. In the more standard config, you can get various 4 or 5 bolt types including one for XTR cranks to allow you to run your own choice of rings.

Lastly, a word about chain rings. The pic shows Middleburn’s own fitted to my set of RS7’s. I use these because they seem to last better than most. It’s very hard to decide on a longest lasting make of chain ring, because the conditions & the weather make it a bit variable, but these seem to do the job. The granny ring has been on other cranksets, so it’s 2 years old or more, The big ring isn’t showing any signs of wear & it’s about 6 months old & the middle ring (gets the most use) is still going after a good few months, but has some wear. Not enough yet to need replacing, but enough that you can see it. The one on there at the mo is a hardcoat, unlike the older one in the pic.

To sum up, buy a set of RS7’s if you don’t mind shelling out a bit of cash for something that will last. They’re due to release an external set sometime soon, so you may want to wait for that – I’d say there’s no need, this one is fine. Another UK product that works & works well.

Enjoyed few hours with Steve at Dalby today. learnt a lot about jumps and drops. Cheers

Matthew Walker
2019-11-02T20:34:13+0000
Just had a brilliant day with Steve from Chasing Trails. His tuition was great, not just what to do on the bike but why too. Home now muddy and tired but worth it for a fantastic day - always a good sign when the shower has a silt left after :) Definitely recommend Chasing Trails for improving your riding!read more

Chris Oliver
2019-06-28T17:24:06+0000
I had a great day working though some skills and confidence issues on the tricky stuff. Really enjoyed the day and my ride the next day put the skills I learnt to the test.

Mark Allen
2019-06-19T22:15:22+0000
I had a fabulous day with Steve last week, learned so much from it I’ll take months to process it all. He’s a great teacher, taking things at a pace where I could feel confident in one essential skill before moving on. I learned the basics of speed control, negotiating drop offs, berms, rocks, bunny hops etc and though I didn’t master them it gave me the knowledge and confidence to practice on my own. Next time out i rode 9 miles of Dalbys reds with my brother in law, I could never have done that confidently beforehand. Whatever level you’re at I’m absolutely sure a day with Steve is money well spent! Simon Lidsterread more

Helen Peace
2018-01-13T20:14:58+0000
Brilliant! My son had a one to one mountain biking day with Steve. He came back absolutely buzzing. He said that Steve was lovely, he'd learnt loads and thoroughly enjoyed the day. We will definitely plan a return trip in to next years holiday.read more

Dean DeanBarcock
2017-10-21T18:05:44+0000
Super day of 1-1 coaching. Learnt how to ride properly and now need to practice and build on all this good stuff. Highly recommend for anyone who wants a better set of core skills from which to develop their bike handling :)

David Leeds
2017-05-23T14:41:39+0000
Throughly enjoyed our day with Steve on a beginners course for mountain biking. I had zero experience with mountain biking before, but Steve was ace and tailored the day to building up some skills and confidence on the bike. We also enjoyed his guided tour of some of the other trails in the forest. Thanks for a great day Steve!read more

Hannah Edge
2017-04-26T09:55:42+0000
I treated myself and my 14 year old son to a skills day with Steve from chasing trails , the day was really great , good fun ,and we both came away with new skills, we can't wait to get back on the trails and put what we learnt to practice . Steve is a brillant instructor , very well experienced and once you have nailed it he moves on ,so you really get a good day and value for money.read more

Robert Carter
2017-03-01T20:52:18+0000
I have just returning from a full day course and I must say that Steve is a coaching wizard! Jumps, drop offs, manuals and bunny hops all nailed in one day! Well the basics at least. But I know have the skills shown to me by Steve to go out and hit bigger jumps and obstacles fast and with more confidence. Cheers Steve, top day. Well worth every penny.read more

Michael Dunn
2017-02-26T21:21:38+0000
I've been riding MTB for about 20 years and felt I just needed a bit of help to shake of a few bad habits/techniques I'd picked up over the years. I went on a Jumps and Drops course in late August and since then I've been practising what we went through and can safely say it's made a massive difference to my speed and enjoyment of riding, particularly over drops and downhill generally. I rode the Marin trail and both loops at Penmachno last weekend and was able to put into full use the techniques Steve taught me. Steve is an excellent teacher who imparts his knowledge and experience in a very effective and patient way. I'll certainly be returning in the not too distant future.read more

Tom Whitehead
2016-10-19T20:11:17+0000
As well as the coaching Steve is very knowledgeable regarding bike repair and maintenance. With 24 hours notice he has replaced the rim that I damaged and rebuilt my wheel to get me back out on the trails. I would definitely recommend his services top job Steve cheers�read more

Richard Glet
2016-06-15T04:56:09+0000
Spent a great day on a women's foundation course yesterday. Steve was a very patient guy and explained things very clearly. There is nothing he doesn't know about mountain biking, both theory and practice, and he knows the Daulby trails like the back of his hand! As a novice I personally found some elements challenging but this was more down to my level of fitness rather than the course content. I now feel more confident on my bike and would definitely recommend the course to others wanting to gain good fundamental mountain biking skills. Thanks Steve!read more

Mike Bradley
2015-04-18T21:14:35+0000
A fabulous day's coaching at Dalby with Steve who not only got the kids and me jumping in a jolly way but also managed to turn Mrs T into a down-hiller with aptitude! All done in a quiet common-sense way that made learning as easy as turning a pedal. We're all just itching to put everything we've picked up into practice.read more

Will Turner
2015-03-23T19:20:54+0000
What an amazing day of coaching! Steve is very patient and very good at explaining technique, and has really made me rethink how I ride. I definately recommend his 1:1 coaching. The course has made me feel really positive about riding again. Can't wait to get back on my bike.read more