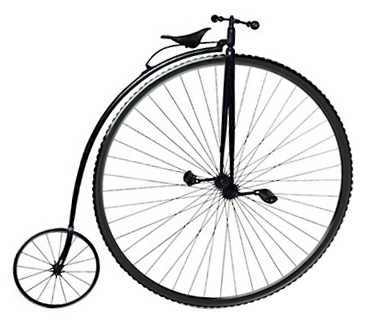 Which MTB wheel size? A brief summary of pros & cons…

I should say to start off that I don’t have any massively strong opinions on wheel size, but I prefer 26ers. #26aintdead and all that… main reason is they’re stiffer & stronger

29er enthusiasts have long held that they roll faster. This is kinda true & importantly for MTBers, it’s only true off-road & not all the time. What they definitely don’t do is accelerate as fast as a smaller wheel, but you might be surprised to know that the smoother the surface the slower they roll compared to a smaller wheel. I know this because I’ve been on tarmac with a sticky 26er tyre, set off at the same speed as a similar weight 29er rider with a faster rubber compound tyre & still freewheeled down the hill faster. The mechanics behind this is the fact that on a smoother surface the bigger contact patch of a bigger wheel creates more drag. As the famous Mr Moulton has known for a long time, the fastest wheel on tarmac is a small one with a high pressure tyre on it. Why? Smaller contact patch = less drag. It’s also uncomfy, hence the suspension on his classic bikes

So when is a 29er faster? Once the bumps/rocks are big enough that the bigger wheel rolls over them smoothly when the smaller wheel is bouncing over them, the 29er will be quicker. When is a 26er faster? On the bits of trail where the give in the tyre is enough to keep the bike rolling straight the smaller wheel is quicker. Also, if weight is the same & wheels & tyres are the same models, a 26er is faster accelerating. This will be more noticeable if you have to overtake lots of people & if there’s lots of tight bends to accelerate out of. 29ers can also make drops feel smaller which can give a rider more confidence to go over it faster. This isn’t necessarily the bike being quicker, it may be that another rider on a 26 will be just as quick if their skill level is sorted

It’s obviously not totally straightforward and things like suspension quality play a part as well. On a route with medium size bumps a 29er will give a more noticeable advantage if the suspension on the compared 26er is poor

In my experience, over a ride different bikes are faster in some places & slower in others. In the end, if you want to prove that one size is best you have to pick a route that suits it!