So, er, with a first impressions and a long term review for Banshee’s Rune a 3rd one could be seen as a bit excessive?!

However, this one will be short as it’s just to give an impression of the ride with 650b wheels compared to 26″.

‘Why make the change?’, you might ask. I’ve long been a supporter of 26″. You can make awesome 26ers. IMO the wheels are big enough & they allow lots of flexibility with geometry and especially with longer travel bikes the advantages of larger wheels are not so great. But it seems the industry is trying to kill it off and I decided to make an economically sound decision for once and sell the 26″ forks while they were in good condition & not yet considered totally obsolete! I’m not against other wheel sizes I just don’t get why we aren’t allowed as many good tyres in 26″ any more!

So, I sold the TALAS 36 160mm forks and replaced them with a set of 650b Rockshox Pikes. There will be a separate post on them, but in a word, great… 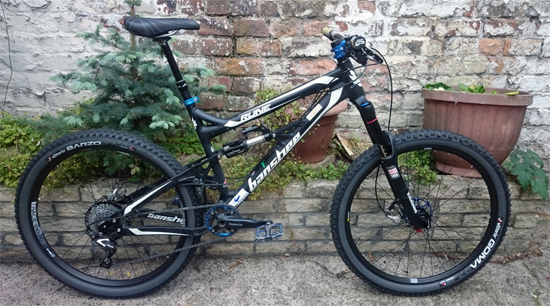 Are there any differences? Apart from the forks performing better, the big positive with the swap over is that the bike is better balanced in the air. It was already good, now it’s extremely good! Handling wise on the ground very little has changed, it still corners, steers and soaks up trails as before. The 650b dropouts are only available in 142mm which is more or less standard & they are slotted for easier axle fitting. It wasn’t that hard before but it’s even easier now. If you’re really looking & you pay a lot of attention to components on, er, all bikes, you’ll notice there’s a 12mm QR instead of the standard bolted one. It’s RS Maxle standard, but not a Maxle. More about that in another post.

The only thing you could call a slight negative would go for any move to larger wheels on a frame with replaceable dropouts. Initially the bike is slightly less keen to manual as the rear axle is further back. I got used to this much more quickly than I expected to. (I did have a quick check to see if the wheels fitted with the 26″ dropouts but no!)

So although there’s not a huge amount to write, I’m pleased with the change. It’s always been a hugely fun bike to ride but it’s genuinely improved as a 650b I think. Also keep a look out for a tyre review of the Vittoria (Geax) Barzo & Goma tyres in the next few weeks/months as well as the One-Up 42 & 16 tooth sprockets & RAD cage.