Have to say 1st up, these are for sale in the Chasing Trails ebay shop. but I like to sell stuff that I use, or would use if I needed one of whatever thing it is.
So, I’ve been running a pair of 650b Vittoria tyres for about the last 8 weeks and I’ve been seriously impressed!

My preferred tyre setup these days combines a rear that’s fast rolling but still has enough climbing grip and a front that grips well in the corners without being too heavy or draggy. The 26er combo I was running was a Geax Saguaro rear & a Maxxis Minion 42a SPC 2.35″ front. The Saguaro was fast rolling & better climbing than it looked. The Minion – as Minions do – gripped supremely well in corners & despite being sticky rolled OK. Put a 42a on the back & it would be a different story however… 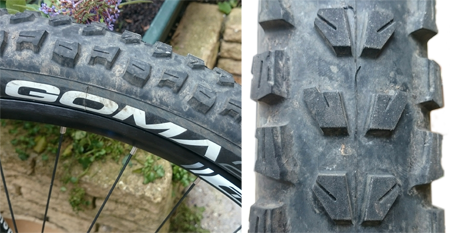 I was half expecting to be a little disappointed with the Goma based on how good the Minions have been over the years & initially it seemed to be a bit more sketchy in corners. I thought about removing it but it looked like it had some release compound on the tyre & once the dust got to it the grip appeared. It’s actually very similar to ride as a Minion. The feel as you push it a bit too hard is almost identical, if anything you get a bit more feedback, but the main thing is it allows you to respond before it washes out.
This is important as a super grippy tyre with no feel doesn’t inspire you to get anywhere near it’s limits. Once you’ve crashed because there’s been only a millisecond between the feeling of losing grip & hitting the floor you instinctively don’t want to go there again! So I always look for front tyres that combine as much grip as possible with good feel. I assumed the Goma would have slightly less grip being a 50a rather than 42a compound but I’ve not been able to tell. It should last longer though as the compound isn’t quite as soft.

The one I’m running is a 2.25″ but is slightly bigger than the Minion 2.35 – tyre sizes do seem to be plucked from the air..! It’s also the TNT version which is folding, has reinforced sidewalls & will run tubeless or tubed. I’ve found them slightly tighter than average to fit, although this will vary depending on the rim. They’re pretty easy to fit tubeless, it’s been on 2 rims so far & seated on both with a track pump. 1st rim got dented in a ‘banked over, end of bar meets woodwork’ scenario, but no damage to the tyre so suggests that the build is good.

It’s been ridden over fairly slippery off camber rocks and whilst few tyres grip in such conditions it hasn’t caused any problems in that the feel gives time to react. So all in all, these come recommended – by me at least! Ideal on aggressive XC to AM & Enduro.

Not as much to say about this one as a rear tyre for me doesn’t have to do as many different things. This one hasn’t spun out on a climb yet & it seems to roll very well. An improvement on the Saguaro is that it has more corner grip so it doesn’t drift as early. This helps get more out of the good grip on the front & increases cornering speed. I assume that if a rear tyre doesn’t draw attention to itself it’s doing a pretty good job!

Lastly, re tyre width, I tend to run the same front & rear, as if you go for different sizes it doesn’t work well to have a wider rear on a mountain bike, MX style, and for me a wider front means more speed than the rear copes with, so I tend to match them.

Hope this is some fairly straightforward, useful info!