This is the first post a good while, I got very out of the habit..!
It’s not exactly a New Year’s resolution to start posting again, but it seemed a good time nonetheless.
Starting the new decade I was considering what was appropriate and wondered if there any brands I’ve used for the the whole of the last decade or for a good chunk of it’. So in order of length of time used: 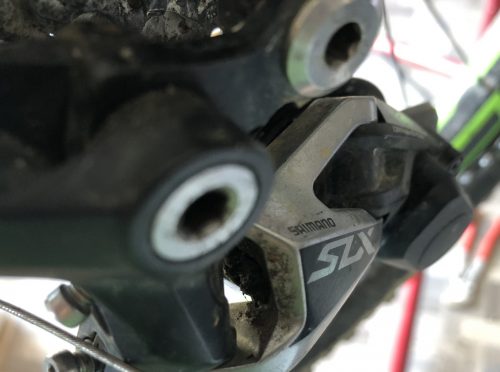 Mountain bikers seem to often be either SRAM or Shimano people. I’ve always used Shimano for gears and been happy with performance & reliability. Since when? Well, since well before Chasing Trails, since around 1991 in fact! From when 7 speed was cutting edge! I don’t have a problem with SRAM, but I just find Shimano shifters are where my fingers & thumbs expect them to be!

I’ve had something by Hope on my bikes for around about 25 years. From the original ti front hubs to todays’s ultra modern Tech 3 brakes. It’s very hard to think of Hope bits that failed & the odd occasion where something needed sorting Hope have been great about it. Currently loving their brakes & Pro 4 hubs. As well as a personal favourite for hubs, it’s the number one brand customers request for builds too.

I don’t use exclusively Park Tools, but I have more than a few favourite tools by them. Highlights are their CN-10 cable cutters and the CT-5 mini chain tool. The same set of cable cutters have stayed sharp since 2005, having cut lots of cables and a fair few old spokes too!
Their mini chain tool is extremely efficient for such a compact lightweight item.

When howies (with a small ‘h’ apparently) get something right they get it very right & their merino base layers are spot on. Warm in winter, even when wet, cool in summer & they keep everything odour free. Can’t ask for much more. Discovered howies from an MBUK interview with the original owners, the Hieatts, around 2006 and have used them ever since.

Not much to say about KMC chains except they work as well as any, are tough & last well. They’re usually a bit lower on price than the others too. Started using them in around 2006 and have done ever since.

I almost forgot about Five Ten, after all, you rarely look down at your feet when riding, but it’s fair to say that they’ve revolutionised mountain biking for many. I’ve briefly tried Teva when they went into MTB shoes, but still had Five Tens & Teva disappeared from bikes anyway.
Currently using the Impact Pro & I think for me it’s the best one yet. The standard Impact is fine, but the Pro has just a bit more weather & knock protection. It’s lighter too, but that’s not particularly a concern for me.

Sapim produce quality spokes & nipples, thoughtfully made & I’ve never personally snapped one. Not much else to say really! Other spoke brands such as DT Swiss are also great, but for me Sapim have the edge and I’ve used them for my own wheels & customers’ wheels for around the last 10 years. Also make the best spoke wrench I’ve found.

I don’t use exclusively Stans rims, but I have had them on a bike for a good 8 or 9 years. They’ve always been pretty tough & really seemed to get tubeless going. Mavic were there with UST, but Stans seemed to make it easier. Tyre fitting became generally no more difficult than with tubed setups whereas UST always had a reputation for being a bit difficult.
The Stans Flow rims in various iterations have become quite iconic and Stans rims along with Hope for hubs are the most commonly asked for components for our builds.

I guess with a hydration pack, like any backpack you’ll like a brand if you find it comfortable to carry. I find Osprey such, and they definitely know quality. I love the helmet retention system which if you have to push up some old school too-steep-to-ride ascents stops the (non)rider getting overly hot & bothered. I’m on the second one since 2012, currently an Escapist 18, so they last well I think.

Many riders love Renthal handlebars & they do seem great quality. I think an ex-Renthal person is also something to do with Hope’s carbon bars too. I’ve not used Renthal bars, but I have used their lock-on grips in the Kevlar version. I’m generally not one for drama, but they seem to magically combine great grip with a refusal to wear out. Like 2 years use & still perfectly serviceable. I’ve used the diamond pattern and the ‘traction’ model and seem to have stuck with the latter, but there’s little in it. They do other compounds but the Kevlar is the only one I use. It’s a rubber compound with Kevlar fibres mixed in – the fibres give the wear resistance but you can’t tell that they’re present. They are a weird kind of yellow though!
First pair fitted in 2014, never used anything else since. Although, Revgrips look very interesting…

OneUp Components are another brand that seem to be interested in quality. Having said that they also manage to keep prices at a reasonable level too. I’ve used a few of they parts, but the dropper posts stand out for a few reasons. They stay play-free for longer than most other brands, they offer a bigger drop for a bigger range of frames than most and they are pretty easy to keep running smoothly.

Feel free to comment below if you have any others you would add. This is just my list of brands I’m still using that I’ve used for the longest. There are other’s I really like but are recent discoveries that will get into other posts & reviews.