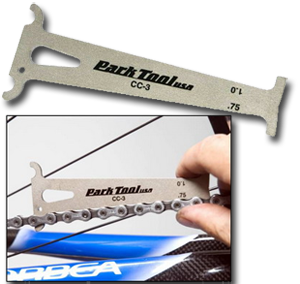 I might be wrong, but I’m guessing that this tool is very underrated by a lot of home mechanics…

If your chain wears beyond a certain point you’ll very quickly need a new cassette & chain-rings as well as a replacement chain. On the other hand I’ve seen a fair few bikes which obviously have wear in the system but actually the chain is OK & it’s just a middle chain-ring that’s gone. Without a definite point of reference it’s often assumed that the chain is the problem.

This is where the Park Tool comes in. It’s cheap, usually under £10 & accurate. It takes all of 10 seconds to check a chain & is about as easy to use as you can get.

It has 2 measures, one side tells you if the chain is more than 0.75% worn, the other if it’s past 1%. If neither side fits into the chain using the method in the instructions, then the chain is fine. So if the bike’s riding well, no need to change anything. However, if it feels like something’s worn, you know it’s not the chain & you can look at the cassette and/or chain-rings. The reason for the 2 readings is that different chain manufacturers have diferent standards. I tend to take no chances & replace when it’s past 0.75%. 1% always seems a bit much on a 9 speed system (yes, haven’t upgraded to 10 yet…)

Park Tools also have another version called the CC3.2 which works in the same way but measures 0.5% 0.75%. It seems some brands/models of chain need to be replaced sooner these days…

You can get other more complicated gauges but I don’t much see the point of spending any more than this for something that’s less simple to use. Other brands do tools that are similar to the Park, but most are less ‘definite’ in the way they indicate. So I’d recommend the Park version. Once you get what it does it’s really a no brainer. Get one!